CONFERENCE OF THE ABSENT
KUNDURA STAGE 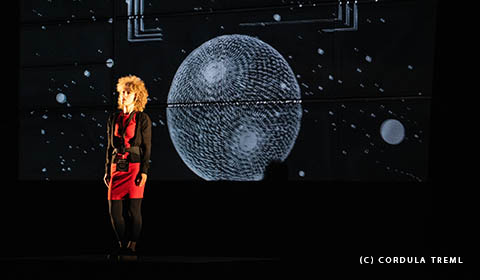 There is a crisis! And in times of global crisis, it's all about global cooperation. Nevertheless, this time the crisis is being dealt with locally - on behalf of the world: at a conference that no one needs to book a flight or mount a train for. A performance to which the invited experts and speakers do not appear physically, but are represented by local people who only receive their script at the beginning of their presentation. In CONFERENCE OF THE ABSENT, the audience observes people from their own city as they take on the identity of an absent conference speaker.
Completely without CO2-emissions and bad Skype or Zoom connections, but with all the performative means of the theater, the contributions and contradicting theses on the consequences of globalization will be delivered into the theater space - and settle them within it.
The advantage of not being there - not having to be everywhere at all - becomes a joint play that can be experienced anew every evening. At the center of this game are people who become carriers of ideas and playfully acquire both biographies of experts as well as their thoughts. In this way, absence becomes an added value because it creates space for new enrollments and unexpected perspectives. Ghostwriters and speechwriters, co-authors and directors at the same time, Rimini Protokoll turns documentary co-authorship into remote directing.

A production of Rimini Apparat
In co-production with Staatsschauspiel Dresden, Ruhrfestspiele Recklinghausen, HAU Hebbel am Ufer (Berlin) and Goethe-Institut.
The concept creation was funded by the Federal Agency for Civic Education.