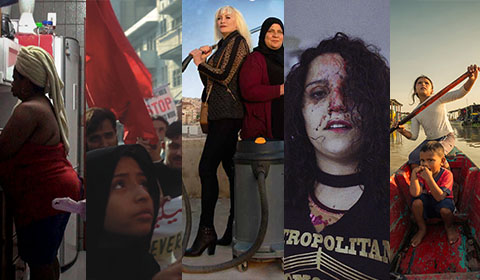 * Please do not forget to read the "Event Notes" section before purchasing your ticket for details such as transportation, health measures, event venue, etc.

Kundura Cinema’s Documentary Zone: Woman Power
Kundura Cinema’s documentary selection “Women of Struggle” which will have free screenings introduces us to brave and daring women from four continents. Saeeda, who has become the voice of thousands of workers while seeking justice for her son whom she lost in a factory fire in Pakistan; Khawla, Aisha and Rehab, the first female plumbers of Jordan; Mexico’s women wrestlers
Lady Candy, Baby Star and Mini Sirenita who fight not only in the rings but also on the streets; Tamara and Natalie, two villagers who put up a heated fight against the shady businesses of politicians in Venezuela will all be at Kundura Cinema with their inspiring stories during the month-long selection. The award-winning documentary “Housemaids” by Gabriel Mascaro, one of the notable directors of Brazilian cinema, which focuses on the lives of seven housemaids will also be screened as part of the selection.